With the semester ended I contemplated a weekend free of work for the first time in four months, and made plans to unwind in Hendersonville at a Christmas fair.  My husband, however, still faced two more weeks of classes and final exams, so I deferred to his need to spend a restorative day in the eighteenth century.  We headed northeast to Old Salem.
Old Salem in North Carolina should not be confused with Salem, Massachusetts, the New England village where nineteen people were tried and hanged as witches in 1692-93.  The Carolina settlement was founded nearly one hundred years later by Moravians, a protestant sect of industrious Germans who relocated to the southern wilderness from Pennsylvania.  Like the Shakers, these Moravians were people of strong faith who practiced a form of communal living and were extremely talented builders and craftsmen.
The proof of that is in the ninety-one original buildings dating from 1766 to 1860 surviving in Old Salem to this day.  These include the circa 1769 Single Brothers House, a kind of dormitory/carpentry-shop where unmarried men lived while they learned a trade; the Salem Tavern, where visitors still dine on bratwurst and beer as George Washington did when he stayed there in 1791; and the tall-spired Home Moravian Church, where an active congregation has been worshipping in the same sanctuary since 1800.


The historic district of Old Salem occupies roughly twenty blocks in the heart of Winston-Salem, the rough-edged tobacco town that grew around it, with some restored residences privately owned and others open to the public.  Upon crossing the covered bridge into the village one steps into a world measured by the clip-clop of carriage horses on cobblestones and an occasional bell toll from the church.  It’s like a spa-day for your spirit.
We have been here numerous times over the last two decades: with my daughter when she was a schoolgirl and craved the cinnamon-scented sugar cake at Winkler’s Bakery; with visiting relatives who took in the exhibits at the Horton Museum, principally the treasures displayed in the period interiors at the Museum of Early Southern Decorative Arts (MESDA); and with gardening friends who delighted in the restored organic kitchen gardens, grape arbors and heirloom apple trees arrayed along Salt Street.  Now that we’re empty-nesters we prefer to visit this Colonial enclave in the quieter, less crowded seasons of autumn and winter.

On the first Saturday in December we were too late for the flaming gold display of the sugar maples, and the gardens had mostly been put to bed except for some plots of collards and cabbages.  But there are plenty of indoor attractions at Old Salem.

While waiting for a table at The Tavern, we browsed at T. Bagge, the gardening store on Main Street.  They drew me in with mason bee-houses, South Carolina gardening guides and organizers for my potting shed.  I happily snagged the last bag of summer snowflake bulbs on discount, Leucojum aestivum. These starry perennials are Dixie’s answer to British snowdrops (Galanthus spp.), which fail to thrive in our clay soil.  Despite their common name, summer snowflakes bloom in early spring in Zone 7B, and naturalize so easily in our region that their white fairy-bell blossoms etched with green are often seen blooming in the gardens of derelict homes long after the gardeners have moved on.
Summoned for lunch at The Tavern, we dared not linger on Salem Square long enough to hear the musicians play more than two bars of “The Coventry Carol.”  Settled out of the wind in one of the cleanly proportioned rooms on the ground floor, we dined on meatloaf, pot roast and hot German potato salad washed down with Spaten lager on draft.  This is hardly typical fare for us, but for my husband, whose youth was spent stationed with the Army in Germany, the Tavern’s stick-to-your ribs menu represents the ultimate comfort food.
Well-fueled, we were ready for a walk, popping first into the A. Butner Hat Shop to try on the hand-made period hats (note to reenactors: check out the ‘Colonel Mosby,’ a beautifully re-created felt slouch hat identical to the one worn by Confederate cavalry officer John Singleton Mosby, the “Gray Ghost”).   We continued climbing Academy Street to the church and circled Salem College, where the strains of the horn players’ music drifted up to us. Crossing Bank Street, we admired the cold-season row crops planted opposite Dr. Vierling’s house and the new beehives sited in a private garden adjacent to God’s Acre, Salem’s cemetery.
One of the key factors in keeping Salem a viable community as opposed to a theme park is the mixture of public attractions and privately owned homes.  This ratio seems fairly fluid, with some homes we’ve visited in the past changing hands and becoming private, while others renovate and open for business, like the Augustus T. Zeveley Inn, a bed-and-breakfast on Walnut and Main Streets.
There are always one or two houses for sale in Old Salem, some of which are listed with the non-profit organization, Preservation North Carolina.  On this trip we noted two homes for sale in the heart of the old district which I looked up later on the PNC website.  The Timothy Vogler house is just about the right size for us, but all that history comes at a steep price.  Whenever FK and I fantasize about the prospect of living in such a place we end up consoling ourselves for its being unattainable by imagining the restrictive covenants that would go along with owning a property in the midst of an historic tourist attraction, as in ‘and we thought having an HOA was a headache!’...
The gray western horizon is tinged with pink as we finish our rambling.  We duck back into the garden shop long enough to select a cedar wreath for our door and make our way to the covered bridge that carries visitors over Liberty Street to the Visitor’s Center.  On the other side lies the 21st century.
A young family is taking pictures on the bridge, and as we approach, the grandfather calls to them to finish up.  FK shakes his head.  Take your time, he tells them.  We’re in no hurry to cross over. 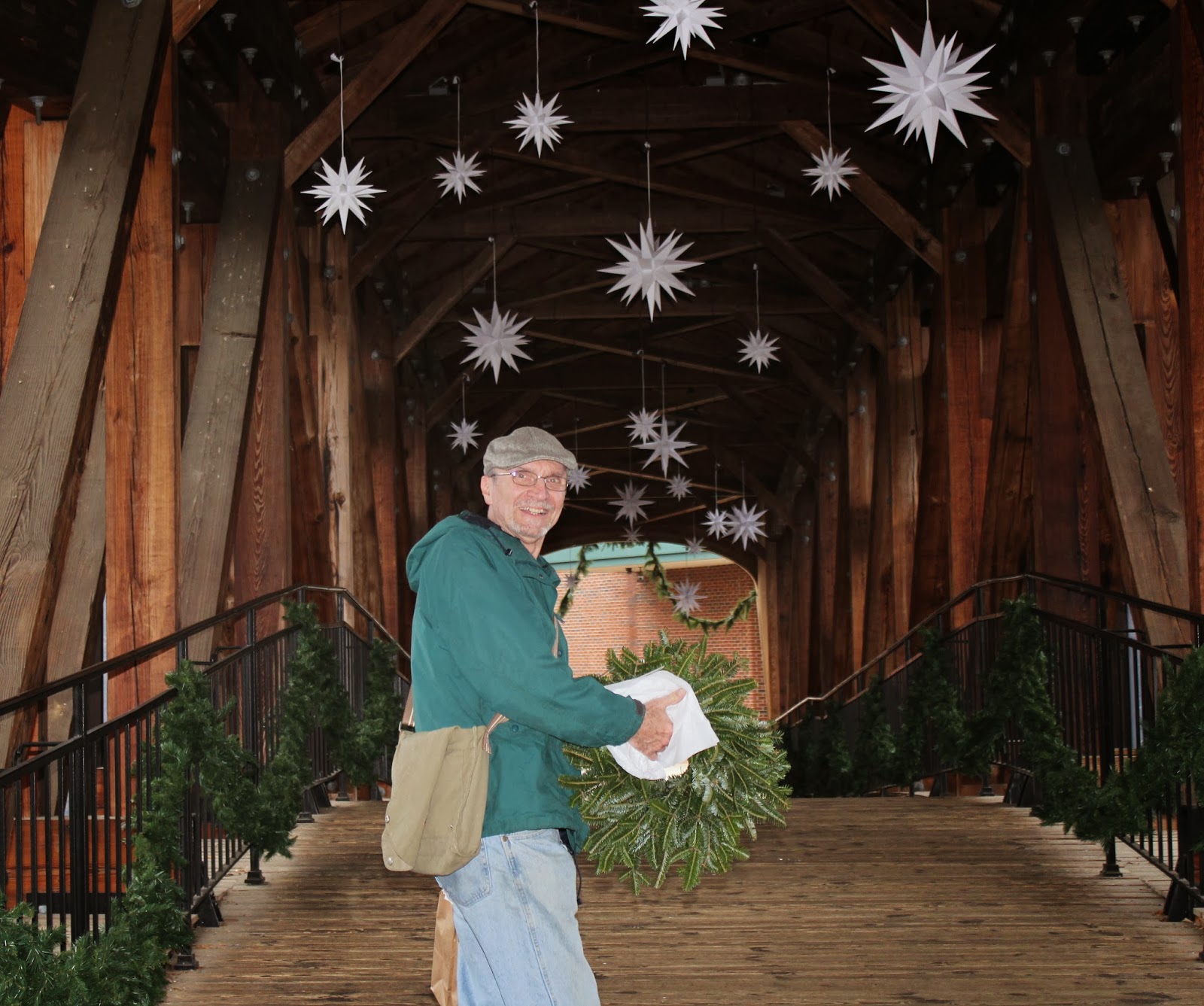 ####
Old Salem is located at 600 S. Main Street in Winston Salem, NC.  Hours of operation are Tues-Saturday, 9-5, and Sunday, 12:30-5.  There is no fee to eat at the restaurants (in addition to The Tavern, there is a sandwich shop located above Winkler’s Bakery) or to enter the shops, but you will need to purchase an admission ticket at the Visitor’s Center in order to enter the historic buildings in the village where demonstrations and tours take place.  For more information, call 336-721-7300.

Reservations are strongly recommended for lunch at The Tavern – call ahead at 336-722-1227.  To see a menu, follow the links on the website for old Salem.
www.oldsalem.org

Preservation North Carolina is an historic preservation organization whose mission is to protect and promote buildings, landscapes and sites important to the diverse heritage of North Carolina.  Visit their website to see what historic properties are for sale statewide.
www.presnc.org

Thanks for dropping by!